Research project. How would this case be trialled today ?

On Wednesday last a Mrs. Ardley, who formerly lived near the Kangaroo-ground, but is now residing at Footscray, called at the Eltham Police Court, and made the following serious statement :-

She was proceeding to Kangaroo-ground(1)In this report her destination was Kangaroo Ground on the previous day, to visit her daughter, who is in service there, and feeling somewhat fatigued, she requested a “lift” from a wood-carter who was returning home. Her application was acceded to, and nothing particular occurred until they had passed the Lower Plenty tollgate(2)Lower Plenty, in earlier times part of Eltham, almost certainly got its name from the Lower Plenty Toll Bridge, built in 1860 to collect tolls across the Plenty River., by which time night had set in. The man then commenced making improper overtures to her, which she indignantly rejected; but when they arrived at a part of the road known as the Sandhill, which is far removed from any habitation, and little frequented after sunset, he committed a serious offence upon her.(3)There are no locations with that name, or nickname in common use (locally) today. Taking into consideration the main route between Lower Plenty and Eltham at that time was Old Eltham Road, my theory is “Hohnes Hill” is a probable location (local history of the name Hohne, or Hohnes can not be verified at time of writing). The theory of this location is supported in News Report #2. Another possibility is “Rosehill” Road which extended to the back of Lower Eltham park. That section (now Homestead Rd. and previously named Banoon) may have been known as Rosehill Rd. ? There is also a hill, outlined on the contour map attached, which is now known as Panorama Avenue, which is another possible location. Where the assault took place is speculation without knowing how she arrived at Mr Batts. She was ignorant of the name of the man, and could give but a very bare account of his appearance; but from her description of the horses, Senior-constable Lawlor was led to suspect a man named Peter Carncan(4)Probably a typo; “Carrucan”, who has been living in the township for a number of years. Obtaining a warrant, he arrested him on the same day, and confronting him with the woman she at once identified him, and he then acknowledged to his being the person who had driven her, but denied having committed the offence charged against him. A special court will be held to try the case upon the return of the police-magistrate, who is temporarily absent upon duty from the district. Mrs. Ardley is the mother of ten children(5)This report “mother of ten, and bears an unimpeachable character; and the prisoner is a married man, with a large family.

Peter Carucan(6)Probably a typo; “Carrucan” was charged with having, on the 31st of August, near Eltham, committed a serious offence on Emma Hardley(7)Probably a typo; in the three articles she is referred to as “Ardley”,”Hardley” & “Ardly”., the wife of a labourer residing at Footscray. He had given her a lift in his dray, and when on the Melbourne side of the Plenty tollgate, he got into the dray, and began to talk about married women. He struck her in the mouth whilst she was screaming, and afterwards took her hand-kerchief, and stuffed it into her mouth. When she got to Mr. Batt’s(8)Batt’s property (if I have read the records correctly) was located on the river side of Hohnes Hill on the road that is now, Homestead Road., she complained of having been very much ill-used by a drayman, and described the man and his horses. Thomas Batt, the poundkeeper at Eltham, proved that Mrs. Hardley came to his house in a very distressed state on the night in question. Her mouth was much swollen, as if she had been struck.(9)Thomas Batt was listed in the rates book, 1863, as having a 9 acre farm in Eltham. He was the poundkeeper from 1860-1869, he is also mentioned as being a prominent subscriber of the Eltham temporary church and a trustee of St Margarets. She described the man and his horses, and said that either Patrick or Peter was the Christian name on the dray. The description she gave tallied with the prisoner and his dray and horses. Mrs. Hubbard(10)? corroborated the witness’s statement. Senior-constable Lawler proved arresting the prisoner, and Mrs. Hardley’s recognising him immediately on seeing him in the lock-up. In cross-examination by Mr. M’Kean, Constable Lawler said he had known the prisoner for ten years, and would never have believed him capable of such an offence. The Bench thought that, although the case was not a very strong one, they were bound to commit the prisoner for trial. 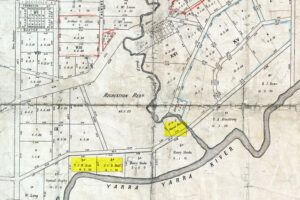 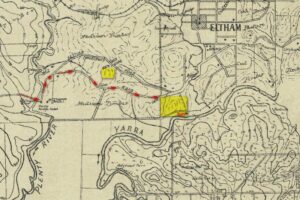 Route to Eltham from Lower Plenty (before Main Rd. opening).

Peter Carrucan was informed against for having, at Eltham, on the 31st August, committed a criminal assault (a capital offence), on ‘Mrs. Emma Ardly. Mr. Dunne prosecuted, Mr. Aspinall defended the prisoner.

The short facts were, that the prosecutrix, wife of a labourer living at Footscray, on the day in question, under direction or with the approval of her husband, left home to go to Eltham(11)In this report her destination was Eltham, to fetch away some clothes belonging to her eldest daughter, which the latter had left at her last place of service at Eltham. After transacting other business in Melbourne and Collingwood, she set out to walk, in expectation of getting a lift by some friendly conveyance. The prisoner’s woodcart was the first that passed her, and as it was unloaded, except as to some horsefeed, she asked him to take her to Eltham. He consented to do so, and she got into the dray, where, according to her statement, given with clearness and candour, the prisoner, on reaching a lonely part of the road near Eltham, committed the offence charged against him in the information. The chief witness’s testimony was in some particulars supported by her respectable character (she was forty-six years of age, and the mother of six children(12)This report “mother of six”, the oldest nineteen years of age), and she proved by other witnesses as to where she had been staying until the Wednesday (two days after the offence), when, having told two female acquaintances about it, at their advice she gave information to the police. It was a subject of comment both by counsel for the prisoner and by the learned judge, that it was strange that such an outrage should not have earlier been brought under tho notice of the police. The prisoner was well known in the neighbourhood of Eltham as a hardworking respectable man in his line of life, and the senior-constable who arrested him, as well as other witnesses, spoke well of him as above. Mr. Aspinall addressed the jury for the defense, urging that it was most dangerous to convict a man of a capital offence upon the uncorroborated evidence of one witness. He closely reviewed the minor points that had been brought out in cross-examination, and said that while not wishing to disparage the character of Mrs. Ardly, it was only just to his client to press upon the jury that Carrucan had been spoken well of by every witness that knew him, and he denied that there was any foundation for the charge made against him. His Honour having summed up to the jury, they retired for a very few minutes, and brought in a verdict of “Not Guilty.” The prisoner was discharged.